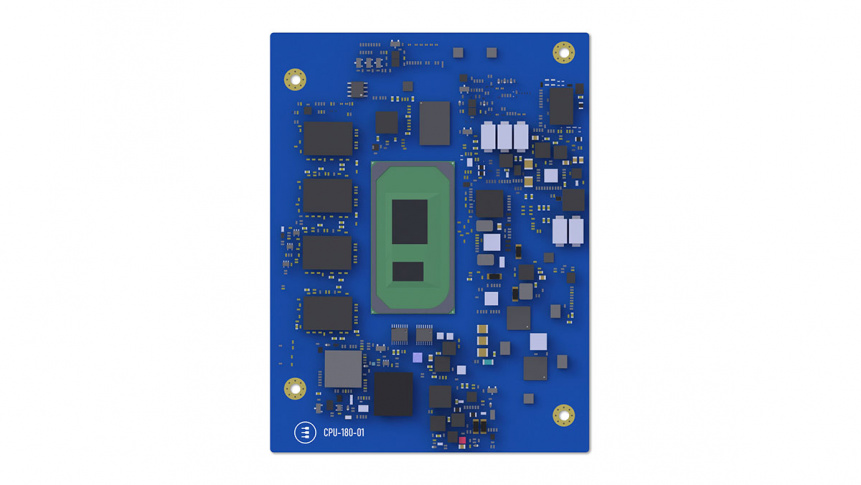 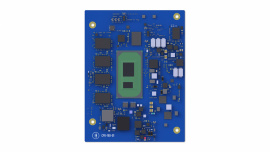 The CPU-180-01 is a COM-HPC Client module that features the 11th Gen Intel Core CPUs. Designed for fanless applications in harsh environments where long term reliability is a must, the CPU-180-01 delivers up to 4 CPU cores and 96 GPU execution units and in- band ECC RAM. It features an all-soldered down design to improve resilience and thermal coupling, and comes with a -40 to +85°C operating temperature.

Both the CPU and the integrated GPU deliver great performance improvements compared to the previous Core generation, and offer AI and Deep Learning, with a combination of INT8 and VNNI instructions. Video encoding and decoding capabilites are also brought to the next level with dual decode boxes capable of up to 40 simultaneous 1080p streams at 30fps and four simultaneous displays.

The CPU-180-01 brings novel capabilities: it features Time Sensitive Networking (TSN) on an Ethernet port capable of up to 2.5GbE, which combined with Time Coordinated Computing (TCC) enables soft Real Time applications. TSN is an evolution of the Ethernet standard that provides time determinism to networked communications, while staying completely compatible with the exisiting Ethernet infrastructures. TCC bridges the sinchronization of the internal clocks with the network to achieve microsecond accuracy.

The CPU-180-01 features the latest high speed interfaces: PCIe Gen 4, with a bandwidth that is twice the previous generation and Thunderbolt 4 / USB 4 that enable PCIe, Video, USB and Power Delivery over a single, standard connector.

Supported operating systems include Everyware Linux (based on Yocto), Ubuntu and Windows 10 IoT Enterprise; additionally, the CPU-180-01 supports Everyware Software Framework (ESF), a commercial, enterprise-ready edition of Eclipse Kura, the open source Java/OSGi middleware for IoT gateways.Professional Services are available for the CPU-180-01, starting from BIOS personalization and including carrier board design, system development and production. Deep module customization, such as feature changes are also available.